Loris Malaguzzi’s birthday, 23 February, and the days leading up to it will see a series of unique and never-to-be repeated events in the city of Reggio Emilia: shows, exhibitions, seminars, conferences, meetings...

For the Loris Malaguzzi centenary celebrations the Remida Creative Recycling Centre will be open all day for everyone to visit, and for distribution of materials for card holders only.

If the Eye Leaps over the Wall conference

Greetings from the Institutions

Luca Vecchi, Mayor of the city of Reggio Emilia

Biologist and expert on the theory of evolution Telmo Pievani has authored several books and papers on the philosophy of science, many of which have been translated into other languages. He currently holds Italy’s first Chair in Philosophy of Biological Sciences in the Biology Department of Padua University, Italy.

Poet, novelist and journalist Tahar Ben Jelloun was awarded the Global Tolerance Award by United Nations secretary Kofi Annan for his work “Racism Explained to My Daughter” and its profound message.

Research Full Professor of Cognitive and Pedagogical Sciences (chair named after John H. and Elisabeth A. Hobbs) at the Harvard Graduate School of Education and Senior Director of Project Zero.

Sociolinguist Vera Gheno specialises in digital communication and is a translator of work in Hungarian. For twenty years she has collaborated with the Accademia della Crusca as a language consultant and manager of the Accademia’s Twitter account.

She collaborates with Zanichelli publishers and teaches at Florence University.

Architect Michele di Lucchi is Professor at the Design Faculty of the Politecnico of Milan and a member of the Accademia Nazionale di San Luca in Rome.

Speaker sessions will alternate with audio and video material not previously made public of Loris Malaguzzi, and of Reggio Emilia's infant-toddler centres and preschools.

The Plenary session will be in Italian and English with simultaneous translation.

“If the eye leaps over the wall” Conference Seminars

1.The right to rights
An ecological vision of human beings

2.The right to subjectivity
The hundred languages give value to the plurality of knowledge processes

3.The right to research
Interdependency in educational contexts between theory and practice

4.The right to competence
Children and adults as participatory subjects in the construction of culture

5.The right to beauty
The ethics and aesthetics of knowledge processes

Fahrenheit is an afternoon programme by RAI Radio 3 national radio, which has been broadcast since September 1999, describing itself as a programme of “books and ideas”. Conceived by Marino Sinibaldi and directed by Susanna Tartaro.

For participants at If the Eye Leaps over the Wall conference, visits and dialogue with aperitivo drinks in infant-toddler centres and preschools, in collaboration with the integrated education system

The Night of Tales “Stories in heaven and earth”

The night of tales: all together, everyone at the same time, adults and children in circles of stories, adventures and emotions, reading, telling and listening.

From Reggio Emilia an invitation to the world to discover the magic and value of storytelling, in where a chorus of voices, like starts, will light up the night of tales.

This year the Night of Tales is dedicated to Loris Malaguzzi and Gianni Rodari who both celebrate their centenaries in 2020.

The theme of this year’s Night of Tales is: STORIES IN HEAVEN AND EARTH

This event is by invitation for representatives of city foundations, institutions and associations, based on seating availability.

Mosaic of Graphics Words and Materials, In the Shape of Clay, Digital Landscapes, Photos at the Centre, Ray of Light

A treasure of tastes: The Reggio Cappelletto

The Pause-Atelier of Tastes Cafeteria will open at 9.30 am for breakfasts, snacks and sandwiches

Inauguration of the exhibition Clay. Prelude to a manual, curated by the Istituzione Preschools and Infant-toddler Centres of Reggio Emilia Municipality, and Reggio Children, an anticipation of the manual on the language of clay to be published by Reggio Children in 2020. The book will offer technical information and educational suggestions by starting from projects developed together with children in the infant-toddler centres and preschools, and with older children and adults frequenting the atelier at the Loris Malaguzzi International Centre.

Inauguration of the exhibition Figures for Gianni Rodari, dedicated to Italian artists who have illustrated Gianni Rodari’s work. The original exhibition was organised by the Italian Cultural Institute of San Francisco in collaboration with Bologna Children’s Book Fair, curated by Giannino Stoppani/Accademia Drosselmeier and supported by Emilia-Romagna Region. The version presented here is a digital revisitation, designed and realised by Reggio Children.

Projection of the IMAGINE A FOREST video accompanying the diffused exhibition of drawings and theories on trees and nature by children in infant-toddler centres and preschools, which can be found in several stores throughout Reggio Emilia’s historic city centre.

Visit of the Allende Infant-toddler centre and Allende Preschool

treesure City Atelier
in dialogue with the nature of trees

The Atelier in the Allende Park offers a time for dialogue with trees, making it an opportunity for contemplation and research in a place of education, where children have their own dialogue with nature as they carry our their research.

If the weather is rainy the atelier will be held inside the preschool.

Suitable shoes and clothes for outdoor activity are advised.

Children at the Centre
Ateliers, explorations, storytelling, games and fun for children and families

Activities are in Italian.

For Loris Malaguzzi’s birthday we will be celebrating with a party moment, and a large cake with 100 candles will be offered to everyone who wants to be with us, children, families, citizens, institutions and friends. The cake will be made by Pause – Atelier of Tastes, and served at 3.30pm in the piazza of the Loris Malaguzzi International Centre.

9.30am Pause-Atelier of Tastes Cafeteria with breakfasts, snacks and sandwiches 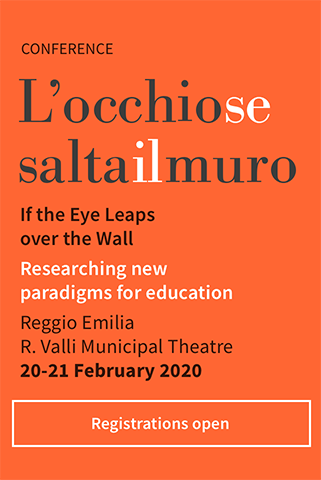